The AVE Mizar (named after the star Mizar) was a roadable aircraft built between 1971 and 1973 by Advanced Vehicle Engineers (AVE) of Van Nuys, Los Angeles, California. The company was started by Henry Smolinski and Harold Blake, both graduates of Northrop Institute of Technology's aeronautical engineering school. 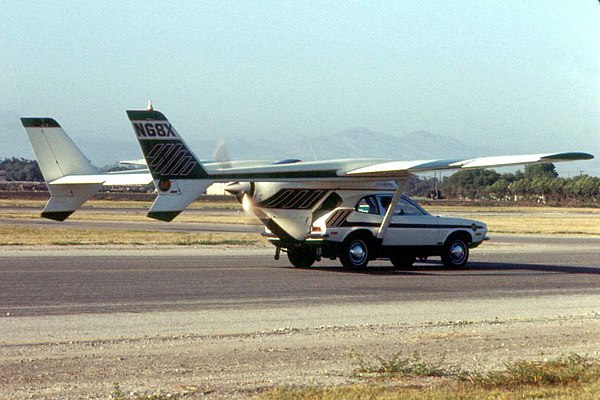 The AVE Mizar. What? No, I'm not shitting you.

The prototypes of the Mizar were made by mating the rear portion of a Cessna Skymaster to a Ford Pinto. The pod-and-twin-boom configuration of the Skymaster was a convenient starting point for a hybrid automobile/airplane. The passenger space and front engine of the Skymaster were removed, leaving an airframe ready to attach to a small car. AVE planned to have its own airframe purpose-built by a subcontractor for production models, rather than depending on Cessna for airframes.

According to Petersen's Complete Ford Book, by mid-1973, two prototypes had been built and three more were under construction. One prototype was slated for static display at a Van Nuys Ford dealership, owned by AVE partner Bert Boeckmann. The other prototype, fitted with a Teledyne Continental Motors 210 horsepower (160 kW) engine, was unveiled to the press on May 8, 1973. Both vehicles were photographed by Petersen Publishing photographer Mike Brenner for Hot Rod magazine in late April. It then began a series of taxi tests at Van Nuys Airport. AVE made special arrangements to do flight testing at the U.S. Navy's test facilities at Naval Air Station Point Mugu, California. AVE stated that Federal Aviation Administration certification flights were underway in mid-1973.

The Mizar was intended to use both the aircraft engine and the car engine for takeoff. This would considerably shorten the takeoff roll. Once in the air, the car engine would be turned off. Upon landing, the four-wheel braking would stop the craft in 525 feet (160 m) or less. On the ground, telescoping wing supports would be extended and the airframe would be tied down like any other aircraft. The Pinto could be quickly unbolted from the airframe and driven away.

On a test flight from Camarillo Airport in California on August 26, 1973, according to test pilot Charles "Red" Janisse, the right wing strut base mounting attachment failed soon after takeoff. Because turning the aircraft would put too much stress on the unsupported wing, Janisse put the aircraft down in a bean field. After the roadway was closed to traffic, Janisse drove the otherwise undamaged aircraft back to the airport.

On September 11, 1973, during a test flight at Camarillo, the right wing strut again detached from the Pinto. With Janisse not available for this test flight, Mizar creator Smolinski was at the controls. Although some reports say the Pinto separated from the airframe, an air traffic controller, watching through binoculars, said the right wing folded. According to Janisse, the wing folded because the pilot tried to turn the aircraft when the wing strut support failed. Smolinski and the Vice President of AVE, Harold Blake, were killed in the resulting fiery crash.

Even though the Pinto was a light car, the total aircraft without passengers or fuel was already slightly over the certified gross weight of a Skymaster. However, in addition to poor design and loose parts, the National Transportation Safety Board reported that bad welds were partly responsible for the crash, with the right wing strut attachment failing at a body panel of the Pinto.